If you haven’t followed the evolution of cameras for the Raspberry Pi, then here is a very brief summary of the latest events:

Interesting? Then let’s get into it.

In 2013, a camera module for the Raspberry Pi with pinhole optics and a viewing angle of about 60 degrees was announced. The device was so successful that a swarm of clones quickly popped up on the market. It’s worth noting that these weren’t just pure clones - we saw many interesting new solutions with a wide variety of optics, up to 200 degrees.

The second version of the camera was released. It used a more recent Sony IMX219 sensor. It’s better than its predecessor in many aspects. But, like the V1, the original camera was available with only one type of optics - a miniature pinhole lens.

Interestingly enough, no clones appeared on the market (and there are still none). The reason is a crypto chip, located on the camera module, that encrypts the interaction between the Broadcom processor and the sensor via the I2C bus. The only thing the market could answer with was the release of a micromodule with a sensor and wide-angle optics, which can be installed on the V2 camera instead of the original micromodule with the sensor. 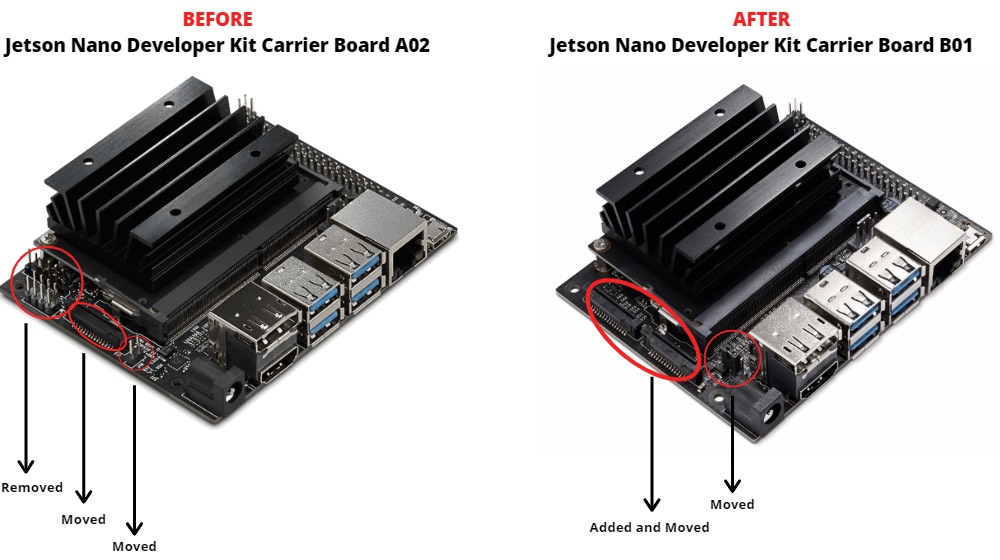 Thanks to Seedstudio for this photo! Source article.

NVIDIA announced the Jetson Nano kit with a CSI-2 connector and support for Raspberry Pi cameras. That is, the camera connector is a 15-pin one that is pin-compatible with the original Raspberry Pi camera. And, in January 2020, NVIDIA updated the kit by adding a connector for a second camera. We modestly hope that it was the community’s interest in the StereoPi DIY stereo camera kit that prompted NVIDIA to make this upgrade and to add support for a second camera. ☺

Meanwhile, camera modules for the Jetson Nano began to appear on the market, based on both the IMX219 sensor and on other sensors, which the Raspberry Pi does not work natively with.

2020: many new cameras for the Jetson Nano 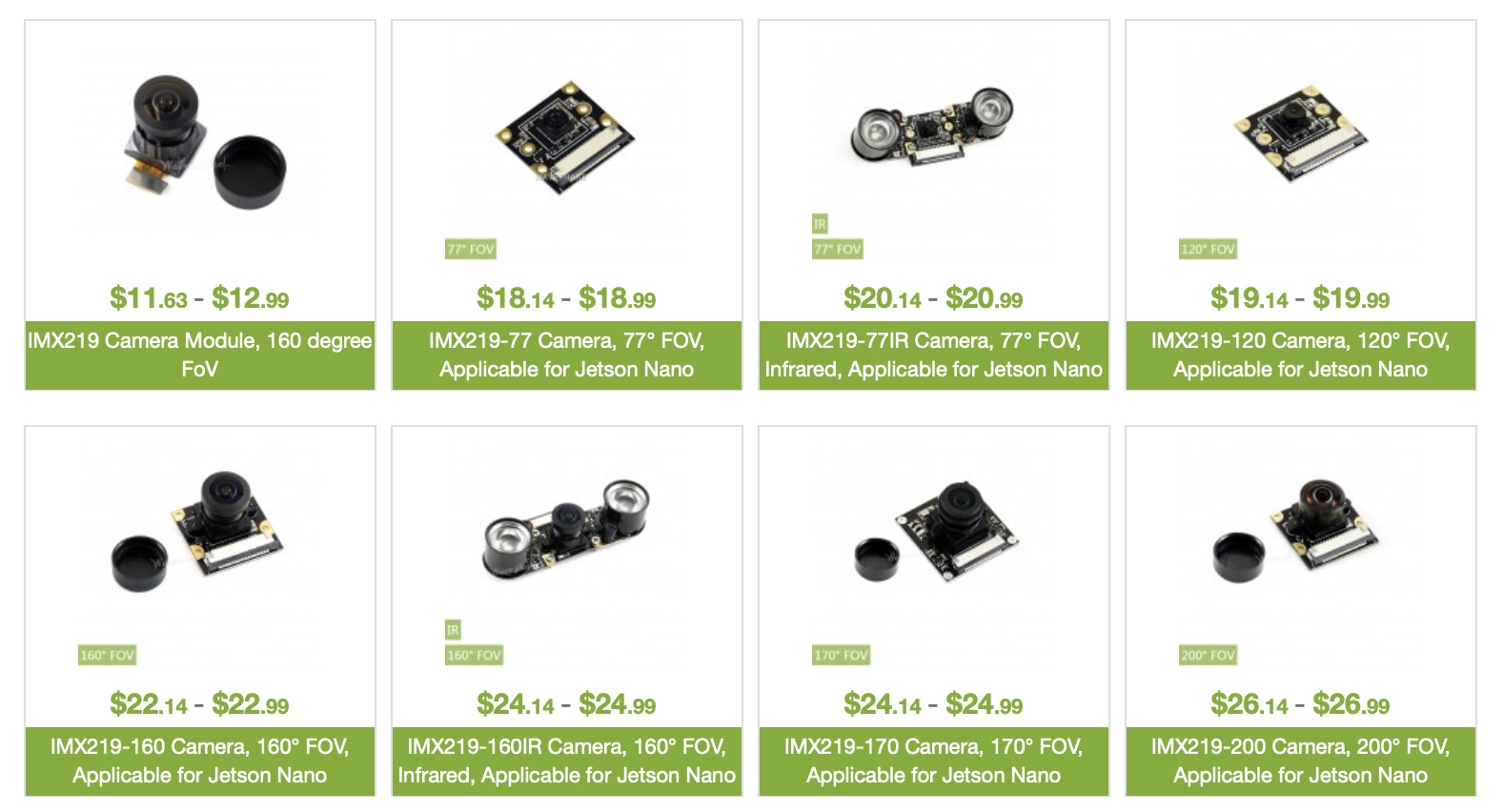 This year, the trend continued, and new modules for the Jetson Nano based on the IMX219 sensor have appeared on the market. These modules are very interesting - they boast viewing angles of 120, 160, and 200 degrees.

According to the descriptions of all these modules, they’re only compatible with Jetson Nano. And this is true - attempts to launch these cameras on a regular Raspberry Pi are unsuccessful. But there is good news too!

So what about that crypto chip?

The original V2 camera module for the Raspberry Pi is protected by a crypto chip. The module’s capabilities are more than enough for enthusiasts and users of the regular Raspberry Pi. But, as we all know, the Raspberry Pi Foundation has an industrial version of its device - the Raspberry Pi Compute Module. This module is used by industrial partners who may need it to work with other camera options based on the IMX219 sensor. Therefore, Raspberry Pi made an exception for systems on the Compute Module. If the Raspbian operating system determines at startup that it’s running on a Compute Module, then the system doesn’t check for the presence of a crypto chip! Here’s one of the mentions of this fact by Raspberry Pi Foundation engineers on a forum. So, these modules work great in Raspbian, and are supported by the native raspivid and raspistill utilities, as well as others in this family.

This situation is interesting in that even the module manufacturers were initially unaware of this compatibility, so they didn’t declare it in their camera descriptions.

To complete the picture, it’s worth noting that you can work in Raspbian with cameras based on other sensors (not just OV5647 and IMX219), but then you won’t be able to use the native raspivid/raspistill utilities, and you would be able to capture only raw data from the sensors.

No additional settings or tweaks are needed for operation. Everything “just works”.
We will update this list as we test new models. 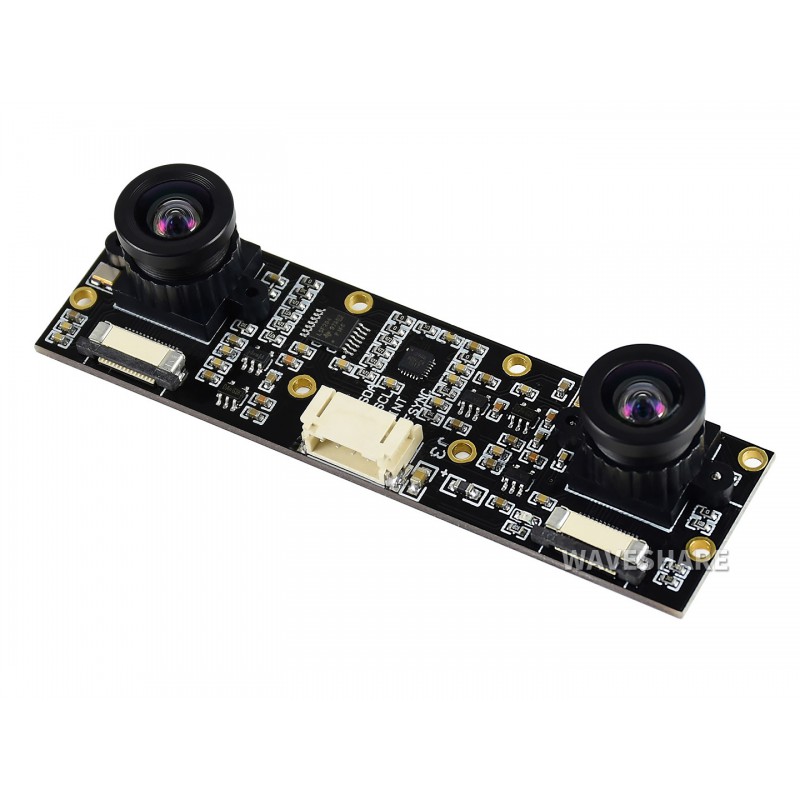 A week ago (in the first week of April) Waveshare announced this new stereoscopic setup for the Jetson Nano. And the description of this setup mentions 'Raspberry Pi CM3/3+, Jetson Nano (B01)'. So it should be compatible with the StereoPi too. Our team already ordered a couple of these cameras for testing.