UPD> We have updated version of this article, including C++ code, here:
OpenCV: comparing the speed of C++ and Python code on the Raspberry Pi for stereo vision

Today we’re pleased to share with you a series of Python examples for OpenCV development. This code works with either the StereoPi or the Raspberry Pi Development Board, as both support using two cameras simultaneously. Our ready-to-use code (and also Raspbian image) will help you every step of the way, from the first image capture to the Depth Map created via real-time video capture.

We would like to emphasize that all of these examples are for those new to OpenCV and are not intended for production use. If you are an advanced OpenCV user and have worked with the Raspberry Pi before, you’ll know it’s better to use C/C++ (instead of Python) and to utilize the GPU for better performance. At the end of this article we’ll provide some notes regarding the various bottlenecks we experienced using Python.

Here is our hardware setup: The software installation process is beyond the scope of this article but we have prepared a Raspbian image with all software installed. Here is a link to our GitHub stereopi-tutorial repository.

All scripts support key stroke processing, and you can press ‘Q’ key to stop them. If you use Ctrl+C to stop the script, it may break the Python interaction with the cameras. In this case, you will need to reboot StereoPi.

We use 1_test.py script for this purpose.
Open the console and go to our examples folder:

After starting the script you can see a preview window with the stereoscopic video. Pressing ‘Q’ will stop the process and save the last captured image. This image will be used in the next scripts for Depth Map parameters tuning.

This script allows you to check if your hardware is operational and helps you obtain your first stereoscopic picture.

The following video shows how the first script works:

In an ideal world, a perfect depth map needs to use two identical cameras with their optical, vertical and horizontal axis all in parallel. In the real world, however, cameras are different and it’s impossible to align them perfectly. Thus, a software calibration method is used. Using two cameras you take multiple photos of an object. In our case, we used a printed chessboard. A special algorithm will then analyze these photos and find parameters for correction. This script begins this process by capturing a series of chessboard photos for calibration. Before each photo, the script starts a five (5) second countdown. Five seconds is generally enough time to reposition the chessboard. Make sure it can be seen by both cameras and ensure it’s stable to avoid “blurred” photos. The default number of photos captured per series is 30.

At the end, we have 30 stereoscopic photos, saved in /scenes folder.

The third script 3_pairs_cut.py separates the captured photos into “left” and “right” images and saves them in /pairs folder. These separations could be done on-the-fly, without saving, but this step is helpful for your next experiments. You can save image-pairs from different capture series. Use your own code to work with this images, or use another stereoscopic camera’s images by putting them in this folder.

This script will show you every stereo pair before it’s separated (and waiting for key press). This lets you find bad photos and remove them before the next script.

Our code also includes the images we used for calibration. You may save them as an example before taking your own stereoscopic photos.

The next script 4_calibration.py loads all pairs saved on the previous step and calculates correction matrices. The script first tries to find a chessboard on the photo and, if it can’t, then it ignores the current pair and continues forward. So if you have some bad photos in your series, it won’t break the script. After all the calculations have been done, the program will rectify the last image and show you resulting “fixed” images. At this step, you can understand the quality of the calibration. In our case, calculations took about a minute and a half.

The next script, 5_dm_tune.py, loads image saved in script 1, and the calibration results from step 4. After that it presents you with a depth map and an interface for fine-tuning. If you want to use our parameters, just press the “Load settings” button. Before tuning the parameters, we recommend taking a photo with 3 objects at different distances from camera. For example one close-up at 30–40 cm, another at average distance (2–3 meters) and another “far” away. It will help you to find the right settings, where the closest objects will be red, and those far away will be dark-blue.

We hope our scripts will help you in your experiments! 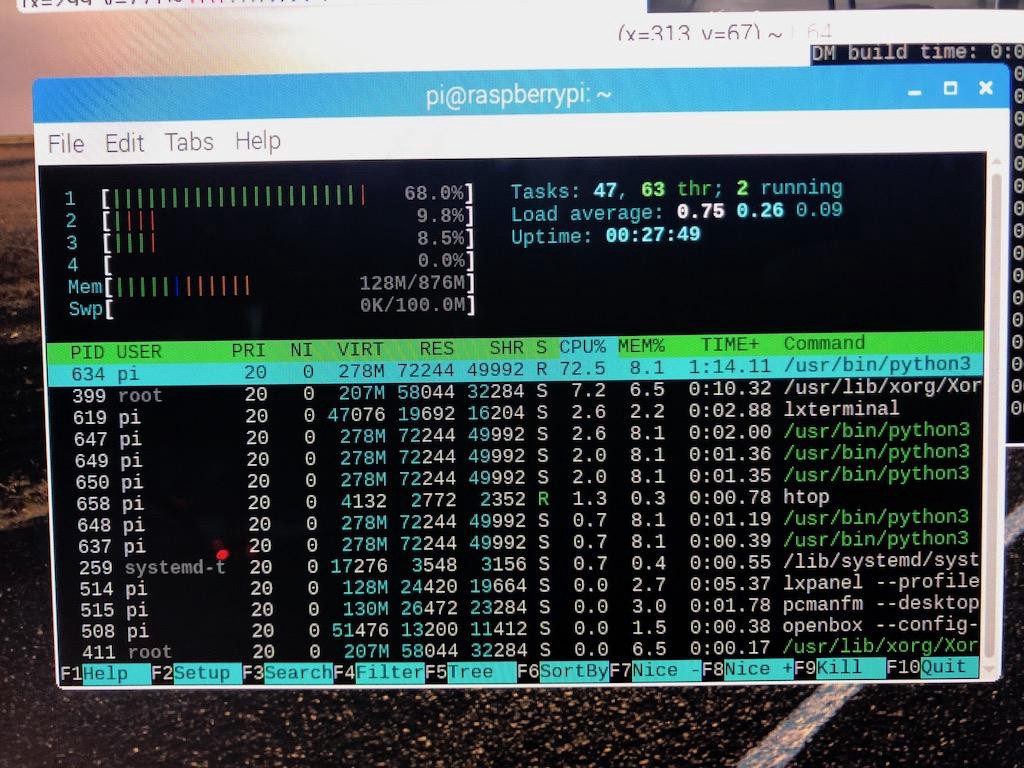 We can see that only 1 kernel from 4 of the Pi’s CPUs has some load — even while rendering the GUI, 2 images and a depth map. This means that there is potential for performance here, and can try to use it by OpenCV optimization (OpenMP) using C instead of Python.

Thank you for reading!

Here is our source code with the Raspbian image links: